Visconti Partners      Actualité      Is your company’s leadership stronger with women ?

It’s a well-known fact : women make up more than half of the population. Furthermore, they represent nearly half of the working population in France. However, when it comes to company management, this balance is suddenly reversed.

While it is true that more and more women are taking up executive positions, there are only 14% of female company heads. And of these, only 15% manage companies with more than 500 employees (KPMG study, June 2015).

Is this because they are less competent in leadership positions? Far from it.

According to a study conducted in 2011 by the American consulting firm Zenger Folkman, women executives are considered better leaders than their male peers by their colleagues, direct collaborators, and others. This study which includes 7,280 leaders in companies in various countries is based on 16 leadership skills.

Female leaders scored higher on 15 of these competencies, and on 12 of them, the score was significantly higher, with a much wider gap on competencies such as initiative, personal development, integrity/honesty, and performance.

Male leaders, as for them, outperform their female colleagues on only one skill: their ability to develop a strategic perspective.

Leadership : to each their own style

Although men and women may occupy the same positions equally, the fact remains that each has its unique characteristics. Depending on the case, these characteristics may prove to be an asset or a hindrance in the exercise of corporate leadership. 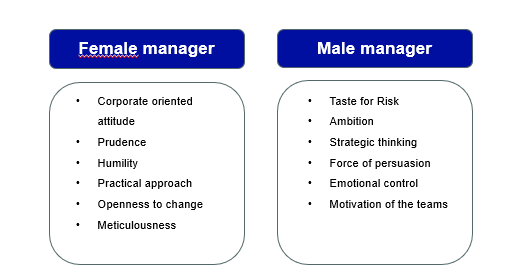 The solution lies in complementarity

According to a recent study conducted by Credit Suisse, firms with women in their executive management or board of directors would be healthier than firms run solely by men. Gender diversity in management is a source of creativity and demonstrates its operational efficiency.

Companies would benefit from taking into consideration the need for this beneficial cohesion in top management. Recruitment strategies, in particular, could be revised in line with this approach.

The fact is that a woman does not need to act like a man to be a good leader, and a good leader is not one because he is a man. Gender is of no importance to lead a company towards excellence, Leaders who have been able to drive their companies to success are those who have demonstrated professional determination and personal humility.

Women executives are considered better leaders than their male peers by their colleagues, direct collaborators, and others.